The Ping sonar is a single-beam echosounder that measures distances up to 30 meters (100 feet) underwater. A 30 degree beam width, 300 meter (984 foot) depth rating, and and open-source software interface make it a powerful tool for marine robotics.

Note: The Ping sonar is currently in beta. The units are well-tested and we are confident in the hardware design, but we intend to improve the software, firmware, and features in the near future.

The Ping sonar is a multipurpose single-beam echosounder. It can be used as an altimeter for ROVs and AUVs, for bathymetry work aboard a USV, as an obstacle avoidance sonar, and other underwater distance measurement applications. Ping combines a compact form factor and 300 meter depth rating with an open source user interface and Arduino, C++, and Python development libraries to create a powerful new tool for marine robotics!

An echosounder, like the Ping, is one of the simplest forms of underwater sonar. It operates by using a piezoelectric transducer to send an ultrasonic acoustic pulse into the water and then listens back for echoes to return. With that information it’s able to determine the distance to the strongest echo, which is usually the ocean floor or a large object. It can also provide the full echo response (echo strength versus time) which can be plotted like the display of a fishfinder sonar.

The Ping uses a 115 kHz transducer frequency, away from those used on most boat echosounders to avoid interference. It has a measurement range of 30 meters (100 feet) and a measurement beam width of 30 degrees, perfect for applications on a rocking boat or for obstacle avoidance. An advanced bottom-tracking algorithm runs on the device to determine the distance to the seafloor, even in complicated situations with multiple echoes.

The Ping is housed in a rugged hard-anodized aluminum enclosure with an encapsulated transducer and a 1 meter (3.3 feet) cable with a pre-installed cable penetrator. It has four threaded mounting holes on the back and comes with a mounting bracket and hardware to make it easy to mount on the BlueROV2. The included header pin to JST-GH adapter makes it easy to plug into the USB to Serial and RS485 Adapter. 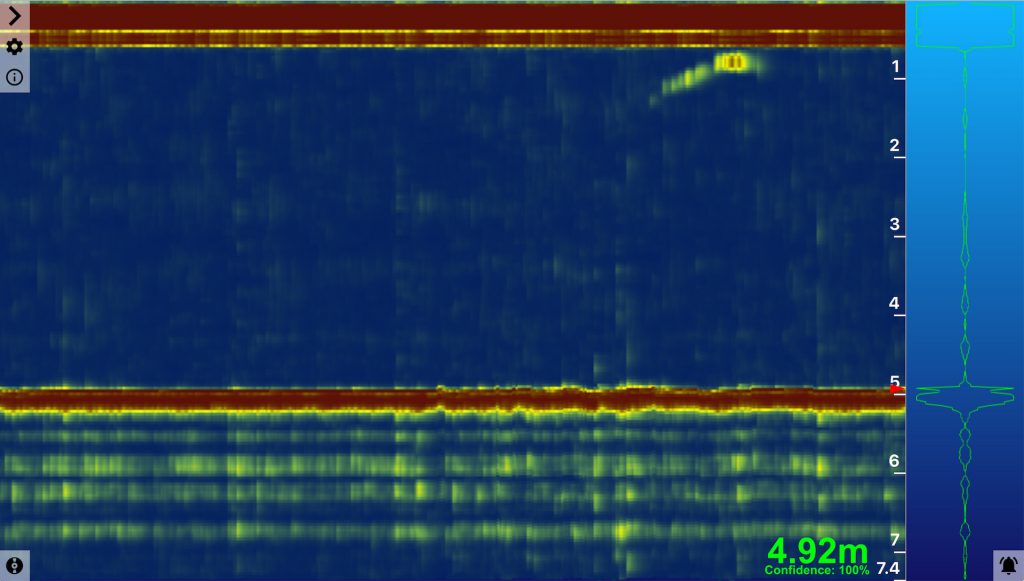 The Ping-Viewer interface to view and record Ping data

The Ping can be connected to a microcontroller device, such as an Arduino, or to a computer through a BLUART USB to Serial adapter. Once connected, we recommend getting started with Ping-Viewer, an open-source application developed specifically for Ping. Ping-Viewer runs on Windows, Mac, and Linux and makes it easy to view the output, record data, and change settings on the Ping. The Ping sonar can be connected to Ping-Viewer directly or over a network connection routed through the BlueROV2’s Companion web interface, so that you can use the Ping on the ROV without using any additional wires in the tether.

For those who wish to integrate the Ping into other systems, it communicates with a binary message format called the Ping-Protocol. We’ve made Arduino and Python libraries for the Ping-Protocol to get you up and running almost immediately.

Check out the Technical Details and Learn tabs above for more information!